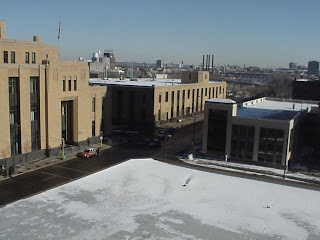 Ten years ago today, Saturday, Aug. 30, 1997, I left Arlington VA for Minneapolis and started a new part of my life with a corporate transfer. I had a corporate-paid apartment move from high rise apartment (in Annandale) to another (the famous Churchill in downtown Minneapolis, right across First Street from the main post office, two blocks from the Mississippi River but on a high bluff).

I took three days for the drive, my new 1997 green Escort packed, with my Erols Windows 95 computer (that’s what we used then) in the back, packed carefully. In fact, the move went well: everything worked when I got there. I would spend the first night with a relative in Ohio, and Saturday morning (Aug. 31, six hours behind Europe time) learn from her neighbors in a building elevator what had just happened in Paris to Princess Diana. The second night I would spend myself in a suburb of Chicago. Monday morning, Labor Day, I got stopped in suburban Chicago by a cop for going about 45 on a divided highway when the marked speed was 30. He saw the copy of my authored “Do Ask Do Tell” book in the back with the “coffin” picture of me, and let me go.

The next period in my life would be one of expansion. I would give two lectures on my book through local Libertarian Party of Minnesota connections, one at Hamline University in St Paul (in February 1998), an event that would be taped and shown on local Minneapolis cable television, with numerous coworkers seeing it. The other would come later at the University of Minnesota. This would be a great time, even with my mishap on January 6, 1998 when I would fall in a convenience store and suffer an acetabular hip fracture. Because of leading edge surgery and an employer health plan that did work when all was said and done, I would recover quickly and not miss a day of work after I returned in three weeks.

Having just published a book myself, I would notice a lot of attention to the whole subject of writing and publishing, with attention in the media to Kitty Kelly for her books on the Royal Family. I would meet another self-published author, Vince Flynn, whose novel "Term Limits" from his own "Cloak and Dagger Press" was creating a local media sensation in the Twin Cities.

The notorious Minnesota winters would not be anywhere as bad as expected. The coldest it ever got was -23 F when I was in the hospital in 1998; in fact, most winters it got below zero only two or three times and there were many mild winter days in the 30s and 40s. Sometimes, even in the winter, there was little snow cover. It was not a whole lot different from northern Va. (there are days when it is warmer in Minneapolis than in Washington DC). The northern latitudes are definitely warming faster.

Over time, a lot would change. I would move back to Virginia in August 2003 for family reasons. The Minneapolis bridge over I-35W that collapsed on Aug. 1, 2007 was one mile SE of my apartment. I had crossed it many times. But as that 1968 song says, “those were the days, my friend.” But they did end.
Posted by Bill Boushka at 5:30 AM