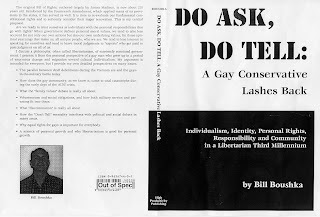 Ten years ago today, at 4:18 PM on Friday, July 11, 1997 (one day after my 54th birthday), I walked into the Post Office in Annandale, VA with three copies of my new book “Do Ask Do Tell: A Gay Conservative Lashes Back,” stuffed into two bubble manila envelopes to mailed to the Library of Congress, two for the Reading Room copies, and one for the Card Catalague. By 4:28 they had been mailed, and the book was officially “published” into “the Wild.” Now, I had circulated manuscript copies of the near-final drafts since November 1996. But this made it “official.”

I had taken rare comp time at work, left at noon and driven out to the airport in Gaithersburg, MD to the plant of a local book manufacturer, and picked up about ten boxes of the books, stuffing them into my hatchback. I had discovered enormous range in prices for print runs, ranging from $7500 from web presses in the Shenandoah Valley to about $1700 for simple book manufacturing here for a 340 print run.

That marked the end of a period of my life, most productive. That same afternoon I would get a call from my employer about a desired transfer to Minneapolis. This was desirable since the book deals with gays in the military and my employer in Virginia, before acquisition, had specialized in selling life insurance to the military.

That wall went well, and over Labor Day weekend in 1997 (the weekend of Princess Diana’s tragedy, which would be in the news all the time) I would pack up and relocate to Minneapolis, living comfortably in the Churchill Apartments downtown, 1500 feet from work. The job would end with layoff-buyout-forced retirement at the end of 2001 (after 52 months) but there would be 14 months at the Minnesota Orchestra within easy walking distance. It would be a memorable time when I would discover the independent film and screenwriting community there. I would give two university speeches, and appear on television at least once (on crutches from a convenience store hip fracture). Those were the days of glory.

I even recall getting stopped in Chicago on the way out for speeding, but the cop let me go when he saw my books. He liked the coffin-like picture of me on the back. So did others. Once a coworker bought it, and sent an email reading “my book” but the correct object oriented parlance was “my instance of the class book.”

The day before, July 10, I flew back to Washington Reagan from Minneapolis, and it was a rare summer day with almost no clouds for the 927 mile plane trip. One could see Lake Michigan and Lake Erie (and even the nuclear power plant on it), and even some West Virginia strip mines perfectly from the air. While on that business trip, I even had the book manufacturer fed-ex the last copy of the book to the hotel, as one page had been duplicated by mistake. There was one huge gaffe that no one notice for a year, about the Age of the Bill of Rights (but it is a mistake to age anything on a book cover, which will itself age). The correct age as of this writing would be 218 years.

I wrote some comments in reaction to an Amazon review on this blog in January. The purchase information is here.

That night (in 1997) I celebrated by going to see the film of Carl Sagan's novel, "Contact." This morning I saw "Harry Potter and the Order of the Phoenix." I certainly cannot claim the commercial success (on any comparable order of magnitude in scientific notation) of Ms. Rowling, and her sensational publishing history started roughly the same time. I started the official supportive website on Aug. 1 1997 (I already had AOL personal publisher then) and have kept the materials in front of the public for ten years, with hundreds of thousands of hits. We have seen Lawrence v. Texas, we have seen COPA fall, and serious proposals to lift "don't ask don't tell" and now popular support for doing so. I would like to think that this ten-year effort has made a difference.

Yes, “Do Ask Do Tell” would make a snappy move title. I hope I can push this through and see the title serve the right purpose. As that lilting movie from 1954 says, “There’s No Business Like Show Business.”