My domains, with blogs as newsfeeds 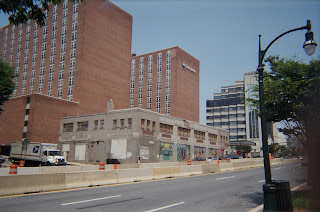 My master site is focused loosely around my three books, especially the first book – the “screed” that I discussed in the January blogs in response to an Amazon review – whose six chapters give me a framework to organize political and social thought in a sequence of concentric circles that develop interrelationships (“worm holes”) among the issues. The master site has directories of reviews, three sets: movies, books, and live performances. The movie reviews include some TV series when the series are “movie-like”. The live performances table has been called “drama” but it includes live musicals, concerts, musical compositions, and the like, and DVD’s made directly from them (or broadcasts of them). The idea, ever since about 1998 (when these were on hppub.com) was to relate all of these media content and performance materials to social and political issues. (Actually, the physical layout of the hppub home page back in 2002-2003 may have made that clearer than does today’s doaskdotell page.) In time, I got to review most things I saw, and in more detail, and the techniques of presenting issues (as in screenwriting) became as interesting sometimes as the issues themselves.

In January 2006 I started my blogs. There are a number of them, and each one has a brief description in italics explaining the essential purpose of the particular blog. From any blog (as from the doaskdotell.com home page) one can navigate easily to the other blogs (from the Profile, which displays all the blogs in the order in which they were most recently updated). I use the simple e-blogger, even though I know there are other possibilities (like WordPress).

The blogs are my way to giving visitors a sense of what’s going on. As I said in a previous post, they serve the function of an expanded news ticker. They are intended to have the effect that AOL has with its headlines, usually about four or five provocative things that have happened around the world in the past 24 hours. (I remember the one about Justin Timberlake and Janet Jackson – the “wardrobe malfunction” mistake at the 2004 Superbowl!)

I have separate blogs for movies, books, and “drama” (in the sense above). Search engines do not like publishers to duplicate content too much, so they are not intended to duplicate the reviews on doaskdotell. Typically, the master reviews on doaskdotell are intended to give the basic information about the book or movie. The “reviews” on the blogs deal with newsworthiness. Most recently published books that I choose to review are important to me for a reason – they create “news” in what they say about some issue (say, gay marriage or family values, or maybe the possibility of resuming the draft). Movies are not so carefully chosen, but I try to see all of those that address any issue that I am concerned about. I try to stress independent films and films that may not be as widely reviewed elsewhere. Films that “make news” (especially those shown in festivals and that may not yet have US commercial distribution) are selected and discussed in the movies blog. Sometimes I make a “master entry” in the doaskdotell site and give only identifying information, and link to a complete review on the blog, for films that are newsy enough.

For television, I often pick episodes of shows that made news, as do some episodes of Oprah (where she introduces a Michael Moore film), or Dr. Phil (where he presents a teacher fired for off-the-job web activity).

Some of the blogs (the GLBT blog and major issues blogs) combine summarizing of news stories with a little editorializing. These blogs continue what I started on the “controversial issues” directory on doaskdotell. That subdomain has a large number of essays, which I used to try to maintain with many footnotes. This has become cumbersome, as I am always hitting a moving target; it is more effective to update the issues with blog entries and link directly to the blog postings from the directory for that subdomain as news develops.

One issue is the search engine reports. For doaskdotell I use Urchin, and I can see from the search arguments what people are concerned about. For example, I can tell that the public is very concerned about filial responsibility laws, about employee blogging, and certain body image issues (especially for men). I don’t get the search engine analysis on the blogs yet, and I would like to resolve this. That is one disadvantage of putting a lot of detailed discussion of a problem presented by a book or movie on the blog rather than on the site.

As I noted last week (June 10), some companies are trying to solve the problem of matching the substance of issues to currency of news. Web2 Corp, discussed last week, tries to tailor current events to the locality of the visitor. There may be paradigms in development to achieve both currency and depth for the visitor, and I will be looking closely to see what various companies are doing about this, and what I can do about it—less artificially than now.

There is a table that summarizes my domains here.