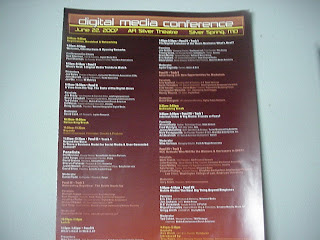 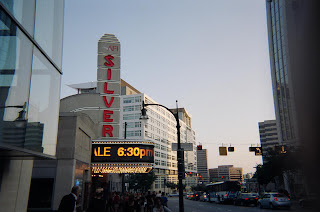 I attended the Digital Media Conference today at the AFI Silver Theater in Silver Spring Md.

There were two keynote speakers (documentary filmmaker Robert Greenwald, discussed at this blog entry today, and Alex Welch, President and CEO of Photobucket.

There were numerous panels, about “Digital Media Trends to Watch”, “The State of the Digital Union”, “Is There a Business Model for Social Media & User-Generated Content?”; “What’s New in Web 2.0”; “The Digital Evolution of the Music Business”; “Internet Video and Big Media”; “Mobile Media”.

The overall tone of the conference bounded around over the question of the value of user-generated content, and its long-term challenge to the supremacy of conventionally licensed and distributed content, which used to keep the amount of content finite. The concern over professionalism was mentioned, including a reference to Andrew Keen ‘s new book “The Cult of the Amateur: How Today’s Internet Is Killing our Culture” (Review here.) Now, the challenge is how to get users to pay for a plentiful non-scarce resource. Of course, there is advertising (and automatically delivered ads), but another tool is to give away content free and ask consumers or visitors for support; some visitors will help if they believe that the publisher is on to something important to them.

IPO’s were getting harder because of Sarbannes-Oxley, but angel financing, from investors willing to accept some losing risks for “home runs”, was becoming common.

User-generated content, even video, is likely to eventually eliminate the need for middlemen or formal distribution companies, necessary in the physical world. One speaker encouraged web publishers to use widgets to enable users to participate. If you don’t trust your visitors, he asked, what good are you doing? One panel discussed virtual world websites like Second Life (there are several others), and admitted that they took a lot of time to learn but tended to captivate some visitors who liked becoming “avatars” in parallel worlds. (The idea certainly suggests some sci-fi screenplay scripts, doesn’t it.)

I asked two of the panels how they felt about all the recent media reports about employers becoming concerned over their associates’ personal blogs and checking profiles of job applicants. One of the panels considered this mainly an HR problem for employers, but not for the web industry as a whole. Another was more concerned, admitting that firings were happening, and that in specific industries there could be real problems with employee blogging because of specific liabilities, such as in pharmaceuticals, where suggesting a non-approved use of a drug can put one in jail. One panelist mentioned that more college kids were whitelisting their blogs and profiles. All the panelists agreed that teenagers and young adults tend to enjoy the limelight and don't have the same expectations of privacy as did earlier generations, and even this has unknown legal implications.

On mobile content, the panelists pointed out that wireless services still bill along a metered service philosophy, and are not as able to offer essentially unlimited content.

The final keynote speaker (Welch) noted that only about 2% of people who watch Internet video content regularly actually create and upload such content.

All of the panelists came from a social and economic background that stressed individual initiative and effort, and paid relatively little heed to business or familial hierarchy and "politics", compared to the sociology of the past.

There were a few exhibitors, including Deloitte, and particularly legal publishing company Pike & Fusher. This company is planning a conference on “Legal Risk Management in the Web 2.0 World, at the AED Conference Center at Connecticut Ave. NW, September 18, 2007. The contact is Meg Hargreaves. The conference appears important in view of topics already covered on this blog, because there is a session on “Citizen Journalism, Libel & Privacy,” addressing who should be held responsible for defamatory content, especially when it seems to be anonymous; and “Online Social Networks & Privacy,” which will deal with widespread reports that employers are checking profiles of job applicants.
Posted by Bill Boushka at 8:05 PM