Reason article on Jimmy Wales and Wikipedia -- information and freedom 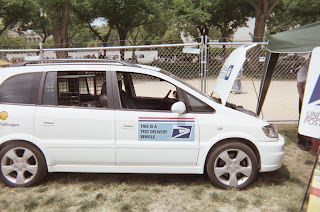 Katherine Mangu-Ward has a new article about Jimmy Wales, “Wikipedia and Beyond: Jimmy Wales’ Sprawling Vision” in the June 2007 Reason, p. 18. She traces the intellectual origins of Wales’s ideas back to F. A. Hayek and describes his low key lifestyle om St. Petersburg. FL, on the libertarian side of Republicanism, attracted to the idea of homeschooling for his own family, but rather disinterested in accumulating possessions and power for its own sake. Nevertheless, as she writes, “he is well aware that he is a strangely powerful man. He has utterly changed the way people extract information from the chaos of the World Wide Web, and he is the master of a huge, robust online community of writers, editors, and users.” And despite more recent controversy over the “credentials” of (often anonymous) contributors and validation of information on his online encyclopedia, and overwhelming majority of the entries do live up to his visions of neutrality, objectivity and accuracy. The occasional incidents of vandalism and controversy are indeed outliers.

Of course, this is all going somewhere. Wales has a vision of creating offshoots to make his business profitable, with Wikia. And competitors, like the Citizens’ Compendium (already discussed in this blog) are attempting to bring back more formal requirements of editing and verification of authorship, ideas tried before and which, when enforced, greatly slowed the appearance of material.

As for Wales’s “power”, he would certainly deny that he owns “the knowledge of good and evil.” (I recall a sermon by pastor David Day at the Metropolitan Community Church in Dallas back in the 1980s and about this as the worst of sins – for anyone to say he doesn’t need God – and I’ll come back to that soon.) Instead, Wales has simply conducted the libertarian notion of “spontaneous order” – that a large community of users will self-enforce ethical publication as part of a natural order.

With my own sites, I have so far been the “master,” and yes, I would like to collaborate or turn all this around – by adding one more dimension to the whole concept – a way of structuring the information so that more visitors (the so-called “average person” in constitutional law cases) get a really complete understanding of the huge issues that we face today. I would like to see if become credible for school systems – if you could get around the politics or approval of curricula (as on LGBT and religious matters) – and I don’t mean that you can do away with the need for others to do independent research (any more that, in my high school days, the existence of printed encyclopedias or even “Knowledge in Depth” volumes could cover the requirements of term papers).. Rather, I would like to see a relationally organized repository or research so we can really track the big picture on these things like global warming, oil supplies, pandemics, terror, civil liberties, privacy, and even the bugaboo “family values”. That means tying together the thought patterns – arguments – with factual history if incidents, and with bibliographic sources documenting the incidents.

I come back to the “original sin” question. In a practical world, people have to take care of one another – most of all in families, but also in community, social and corporate contexts. That means that power matters, and that sometimes hierarchy needs deference and respect in order to have the credibility to take care of people. (One particularly disturbing variation of this occurs when someone says or implies, "You need God more than I do, so Obey Me!") At one end of this, there are the recent arguments about the institution of marriage – that without social deference men will not find it worth while to get and stay “actively” married and raise families. In terms of personal responsibility (as conservatives and libertarians see it) that kind of argument works both ways. Without “power” (and often without a lineage) it is harder to do the big things that help other people. Responsibility goes way beyond a “choice” to have or not have children.

The open flow of information, further structured as I have been describing in these posts, somewhat goes against the grain of social and familial hierarchy as many people see it. They may find it threatening, or undermining, as I noted in the previous post. Others, however, may find it liberating, giving them the opportunities to raise their families according to their own beliefs. All of this counters a long-term historical perspective that accepted the idea that information is slowly passed down through a localized hierarchy, and where group-centric propaganda has always been an important component of political science (as I was taught in high school civics). It's fresh in my mind, too, all those history lessons about how sensitive politicians, even in a democracy, can be to dissent (consider the sedition laws of the past, and Woodrow Wilson's paranoia in defending the WWI draft). (Interesting: final Jeopardy on the final round on May 17 was about the two major sedition acts in American History!!)

As noted before, I receive some pressure from people to compete according to their “rules” of hierarchy, and even take advantage of other organized “power structures” to protect me and others around me from “discrimination,” rather than speak for myself so visibly and undermine efforts for collective relief. Elements in power need loyalty in order to remain effective.

The increasing availability of information has gradually allowed more people to become somewhat self-sufficient. This idea may go back to the Enlightenment, but it really took hold with the civil rights movement and with advances for women as economic equals, and somewhat tangentially then for LGBT people. The idea depends on a globalized, technological society which can be undercut by external forces. The Taliban would provide one extreme patriarchal example of how some men feel that their effectiveness in the world in performing what they see as religiously driven obligations is undermined by the freedom and independence of others, and of the free flow of information.
Posted by Bill Boushka at 12:19 PM