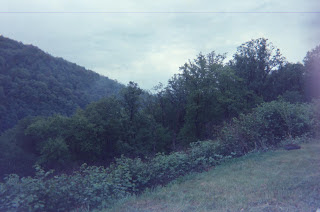 Friday, May 26, 1961, 46 years ago today, was one of my red letter days. I was about to graduate from high school (Washington-Lee in Arlington VA) in June valedictorian, and that weekend a bunch of us in the “Science Honor Society” went on Memorial Day weekend field trip to Mt. Washington, NH.

We packed into two cars, one driven by the physics teacher, the other by a parent who happened to own a cabin in Center Sandwich, NH, where we would stay. I remember the drizzle as we rode up the New Jersey Turnpike and played “ghost” in the car (I don’t remember the rules). We arrived in Boston about 10 PM that night and stayed on a motel on Commonwealth Ave. I remember my “roommate” and a discussion, at the end of a 21 hour day, then about how dating girls would open up a whole new world.

My senior year in high school was the first year that I made a lot of friends, and I recall that about six weeks before, a Saturday late in April, I had gone on my first “hike” in Shenandoah, along a relatively obscure trail called Piney Ridge and Piney Branch. It had been a strange spring, after one of the coldest (pre-global warming concern) winters ever (1961 was the year of the famous Kennedy inauguration blizzard in Washington); a couple days before the hike, we actually had an inch of snow in late April, and then the day of the hike itself we had record heat. (It’s a good thing we didn’t try Cedar Run and Whiteoak Canyon, which are hard going up in heat.) For the first time, I stopped at the famous Frost Diner in Warrenton. Those were the days my friend.

Saturday we would go up to New Hampshire. In the morning, I had my first coffee ever. In those days, kids were not exposed to things as early in life as they are now (I think the 50s baby boomer generation was over-protective of city and suburban kids, because farm kids still learned to drive at 13 or 14 then, and smoking was socially acceptable, and chewing gum -- “your cud” -- in class as a detention-generation offense).

We got to the Sandwich cottage that night. Somehow we got the news that the “new Senators” had already beaten the Minnesota Twins (old senators) twice that weekend in Griffith Stadium’s last year of existence, or at least use. (The new Senators would actually beat Baltimore the night I graduated -- a feat – but would soon start their spiral for the 1961 season with a lost weekend in Boston, including a game where they would blow a 12-5 lead in the bottom of the Ninth at Fenway Park).

That evening we did a Nighthike (a favorite ritual in my screenplay attempts – as well as in a critical episode of The OC) on Rattlesnake Mountain, overlooking the New Hampshire lake country. Sunday, it was too cold and windy to climb any of Mt. Washington, so we trucked up to the summit to see the weather station. In those days, science kids in the DC area actually got summer jobs with the Weather Bureau (I didn’t, although I would soon have three summers at the Navy’s David Taylor Model Basin). On Labor Day in 1976, I would ride the cograil up Mt. Washington again with gay friends in the rime ice.

Sunday afternoon was spent on Chochorua, in the lake country, and Monday (Memorial Day) on the way back we watched a parade in Tilton, NH. I remember being impressed by all of the oil refineries, trains and industry along the NJ Turnpike on the way back. We ventured into Deleware (the Blue Hen State) because there was no I-95 through Maryland yet. I think the Bay Bridge was one span then. (Until the mid 50s, the family had taken the ferry to even to Ocean City – nobody knew what Rehoboth would mean then.)

Earlier, in April 1961, I had made an overnight trip to William and Mary to take the chemistry placement test, and I seem to remember a science tour of a paper factory not too far from Richmond.

I have plenty of nostalgia for that year, when I turned 18. The “new Senators” would finish 61-100. The Redskins would win only one game, as I recall. I had not been away from home by then as much as I should have been (I passed up a trip to France in Ninth Grade, only to go finally in 1999.) The year would end in a social or political catastrophe that would change my life. It’s interesting to me that TheWB Smallville has an episode retrospect set in 1961, with a movie marquee for “Splendor in the Grass.”
Posted by Bill Boushka at 11:55 AM