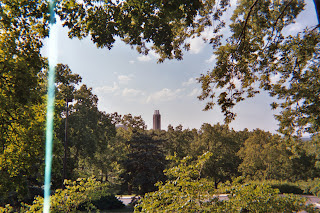 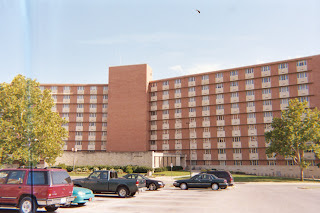 I attended the University of Kansas from Spring 1966 through Fall 1967-68 (just before getting “drafted” into the Army) where I earned an MA in Mathematics. All four semesters I lived in McCollum Hall, room 907, where I had a window view of Iowa Street in Lawrence KS (aka "Smallville"), which then led to open prairie. The other side of the building, on a 200 foot ridge called “Mount Oread” looked out over the campus and down to the town, with downtown (now funky) Massachusetts street about a mile away. There have been changes since then: married student housing built on the slopes of the “mount” (it was there when I visited in 1982), and private residence halls like Naismith. Lawrence today looks like a bastion of progressivism in an otherwise conservative area. I did not have a car then, but sometimes I rode with friends into KCMO (Kansas City, aka Metropolis). Those were the days, of Vietnam war resistance and Ayn Rand discussion groups.

Thunderstorms were common, even in the fall, where they could go on for hours at night. So were tornado watches, and students would sometimes go out and look for funnel clouds as “recreation.”

Nothing like the Greensburg KS catastrophe happened then. Greensburg was caused by what meteorologists call a “wedge tornado” which is a super wide funnel low to the ground, as wide as two miles. And this one was an F5 on Fujita Scale (there is also Beaufort). The only other such event that I remember was the Wichita Falls, TX tornado in 1979 when I was living in Dallas. There was a similar tornado in Oklahoma in 1999. In 1998, when I was living in Minneapolis, there was a supercell that formed in southwestern Minnesota on March 30 (while there was sleet in Minneapolis, just behind the cold front) and wiped out two small towns, each smaller than Greensburg, which was home to 1500 people.

As if this were not enough, there will be extensive flooding in the Midwest, as the low pressure system stalls, although it probably will not match the 1993 floods.

All in all, if I still lived in Dallas and if I still had my Pleasant Grove condo, and if a disaster on such a scale happened in the south central states (and this would certainly apply to Hurricane Katrina in 2005) I can imagine the pressure from my own social world to take in people who were displaced. This is something I have done only once (in 1980, for three months), and I am a private (yet now public, with the blogs and websites) person who likes to go my own direction.

The hype about global warming and the super storms it can cause, and all of the other huge external challenges we face, does raise the question of social interdependence, a topic already mentioned on some earlier blog posts. In fact, the prevalence of individualized life styles, apart from family, arguably increases waste and inefficiency and environmental damage (although singles tend to live in high density areas and may drive less). Huge catastrophes like 9/11, Katrina and Greensburg (as would perhaps a global avian influenza pandemic) remind us that, no matter how “responsibly” we try to live as individuals, we can be forced to depend on each other, sometimes not on our own terms.

I see people making demands of family loyalty and manipulation that seem to me like intrusions on privacy and in other situations that sound like class bigotry or prejudice. Others see it as necessary blood and community loyalty and solidarity. Individualism provides an answer to class and race prejudice, but then it invites its own set of problems. Many people of earlier generations are heavy socialized and accept modes of interaction and commerce (such as door to door selling) and commercial manipulation that seem abusive, invasive or at least inappropriate according to more modern customs of individualism. Companies and employers struggle with this as they make hiring decisions, and are not always up on what more modern customers expect.

We have a new kind of tension: between a sense of “morality” shaped by the needs of family and community (even gay communities and churches sometimes form what they call “family groups” that demand internal loyalty), and by the standards of individual performance as viewed by an open society. On a global scale, there is no such thing as moral utopia. Some concept always has to give a bit. Consider our goals: elimination of discrimination for almost anything, equality, family values, an optimal environment for having and raising children, taking care of the elderly, giving the largest possible opportunities for the disabled – and, last, a renewed sense that personal freedom cannot be taken for granted, and that burdens and sacrifices need to be shared by individuals in some equitable way. These sometimes clash in particularly painful ways with LGBT i
Posted by Bill Boushka at 6:19 AM

Did you submit your site at blogsearch.sg?

You can reach blogsearch by just typing blogsearch.sg in your browser window or click here