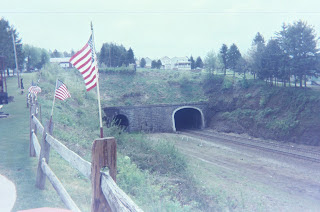 “From each according to his ability, to each according to his needs!” That mantra, from Karl Marx and his Critique of the Gotha Program (1875) (Wiki reference) got acted out in the drafty eyebrowed barracks of Fort Eustis, Virginia in 1968-1969 by various “EM” (soldiers). We gave ourselves animal names like Lizard, Ostrich, Ocelot, and sometimes names of scientists (Rado Suhl) and most of all, Chicken Man (me), as pseudonyms as we acted out this “la grande comedie” to make fun of the collectivist ideas going around us. In 1968, we actually thought Nixon had a better chance of ending the war in Vietnam (so we would not wind up as cannon fodder) than Humphrey. He did end it, eventually, and indeed the draft, although we really had no idea what was coming, what is great history today.

Some of that banter followed on the heels of the 1969 Stonewall riots in New York, and word of it was leaking, even into the military establishment. Officially, no one would mention it, but under the tables everybody knew that “homosexuality in the United States Army” was rather common. How history has twisted into pretzels or a Mobius strip, with a “don’t ask don’t tell” policy for gays in the military today, and a mentality that it sets up that threatens to spread into other areas of our culture. Actually, they always been there.

The Culture War sounds like a perfect storm, a low pressure system created by the counterclockwise spin of conflicting moral aims. Al Gore, for example, has written a book “The Assault on Reason” (review: ) and writes about how the current neo-conservative administration has twisted rationality to get its way (with both the war in Iraq, and tax cuts), as if morality were a group problem. He does talk about the limitations of reason, however, as an individual moral precept: He writes, on p 13, "Moreover, the abstract nature of reason made some of the most zealous practices dangerously numb to human realities rooted in emotional attachments and shared feelings of responsibility for community, family, and nature."

His implicit message here is that morality is, in the final analysis, and individual matter, or individual values and conduct. It’s just that the way he presents all the big issues doesn’t quite support that. But let’s cut to the quick now.

The single biggest question of individual morality today is the tension between interdependence and independence. There is another was to put this: the tension between “adaptive” behavior and “psychological surplus.” The concept does relate to the way burdens are shared by individuals (especially within a family or particular community), not just by and among competing groups or classes. No matter how productive a particular introvert is, his or her output means nothing until others connect to it -- and preferably to the person, too. Modern individualism assumes that one can perfect oneself until one can have exactly the interpersonal relationships one wants, and that the flow of information among people should not depend upon committed hierarchal relationships. But this goal for personal freedom can lead to more conflicts with those following older communal values than supposed, and these can become intractable.

Social interdependence is a virtue that earlier generations could not afford to question. The main way that it was implemented was the biological and lineage-generating nuclear family, surrounded by the church (or comparable religious structure), immediate community (the “townspeople” effect) and ultimately political and workplace (and, yes, military – think about “unit cohesion”) authority structures. The nuclear family, of course, was built on a structure of public morality where sexuality – for everyone – was regulated for the benefit of marriage and child-rearing. Central to this was the concept of abstinence outside of marriage.

In that kind of world, “you” were expected to defer to the needs of other family members in setting your own goals. It’s true that, in this kind of world, the needs of more vulnerable and less competitive individuals could often be met locally. It’s also true such a system was very easy for the socially, politically or economically privileged to take advantage of. The whole Civil Rights movement of the 60s and the social activism of the 70s was predicated on notions of group justice, class struggle, and large scale oppression. Yet, the political Left often pointed out that privileged individuals had often never proven that they “deserved” what they had inherited from their more fortunate circumstances or parents. The extreme antidote to all of this was Marxism, with the ultimate purge being something like Chairman Mao ‘s “Cultural Revolution” in China in the 60s. The Cold War (even leading to the Cuban Missile Crisis of 1962) revolved around the ideological problem in circuitous fashion.

So liberation occurred with the promotion of individualism, and most of all by the idea that “you” could pursue your own personally expressive goals before making emotional (or political) commitments to others. By the 1990s, many people realized that gay rights and objectivism were logical bedfellows (look at the writings of Gays and Lesbians for Individual Liberty).

One problem with this is that individualism leaves a lot of people out. Another problem is that it can leave a free society particularly unprepared to meet exogenous threats, at least depending on how those threats are met. One idea we often hear is that an avian influenza pandemic (which I still personally think is preventable) would force people into new patterns of interdependence and pseudo-mandatory “volunteerism” and might provide a moral purification. It’s easy to imagine similar arguments with respect to global warming and the possibility that oil can run out.

The other problem is that deferential loyalty to family members or other communities is perceived as owed. Everyone had to be raised, and everyone needed the emotional attention from others before reaching the capacity to reason for oneself. By that logic, everyone owes a karma-like debt to help raise the next generation, as well as to care for the previous one. This is becoming an increasing problem as people live longer and have fewer children.

We have, with the Internet especially, renewed focus on what used to be an old “reputation” or “family honor” issue: attention-getting or expressive behavior can undermine the well-being of others in one’s family, whether or not one has one’s own children. Family and community responsibility and interdependence doesn’t exist merely by having children. Responsibility can include an expectation to be responsive to (or to pamper) the "non rational" emotional needs of other family and community members, some of whom have lived with the expectation that the family and community will provide them with meaning, regardless of the "global" world outside. Sometimes having children (in marriage) can be seen as the best way to carry out what seems like a social debt to others. It can be looked at both ways. TheWB's series "Seventh Heaven" renders a pretty good picture of this.

Religious traditions tend to stress community well being and tend to accept the idea of political oppression, and that life should be made worth living (with salvation by Grace, in Christianity) despite external circumstances that make achieving one’s own personal goals impossible in some cases. Indeed the early Christians apparently had a totally communal lifestyle and set of values.

Homosexuality, especially in men, has been resisted precisely because it challenges the idea that one can count on procreation and lineage as personal aim when other circumstances beyond one’s control (or personal lack of ability) limit personal opportunity. Sexual orientation may have a biological or immutable basis, but the person who is “different” is put in the position of being perceived as creating a moral hazard for others, and that the person still owes something back for being raised. Society (with policies like the military gay ban and resistance to gay families) tries to isolate gays, and then in circular fashion (although cleverly questioning the negative existential potentiality of gay fantasies and values) complains that gays abdicate mandatory family responsibility, and is only too eager sometimes to pounce and make gays "pay their dues."

Yet, the deeper problem seems to be how individuals will share the burdens of others. All faiths know that. But we don’t quite know how to bring that into public debate. Generally, coercion, collaring and channeling "different" people into supporting emotional and social stability for the majority, gets accompanied by corruption, although occasionally some relatively strict (if somewhat closed and circumscribed) societies, like Singapore (or even the Mormon Church), seem to function surprisingly well. It's all troubling.

Labels: security and open technology use