A church sermon about "winners" and "losers" 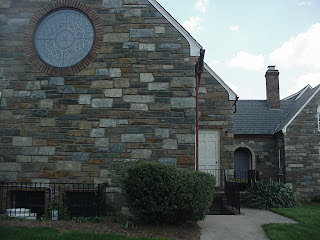 I don’t often report on church sermons, but something interesting happened Sunday April 29 2007 at Clarendon Presbyterian Church in Arlington VA.

Pastor David Ensign has often mentioned the sociology of the early Christians, who had a concept of holding property in common, living according to a very communal set of values. He has sometimes mentioned the contradiction with modern extreme capitalism, with its “winner take all” mentality that, he said yesterday, “effectively makes all but one of us losers.” You do see this all the time, where the Board Room on Donal Trump’s The Apprentice has become almost a caricature of this “attitude.” Princeton professor David Callahan has commented on this in his book “The Cheating Culture.”

Indeed, Christianity, despite its roots in what seems like a psychological socialism, is credited with leading to capitalism and freedom as we know it today. One can certainly say that about Judaism. This is said to contrast it to Islam, although one must consider historical reasons (back to 1000 years ago when that civilization was at its peak) as well as theology or ideology.

Toward the end of the sermon, Ensign said that at a typical African American church, they would chain the doors until getting another love offering. Here, he asked every person in attendance to approach another person whom he or she did not know and try to get to know the person.

In fact, I had a little success with this at coffee, with a discussion about substitute teaching and why math is so hard for many students to learn.

But I did feel a little put off by this exercise in “forced socialization.” Modern freedom has often meant, to many people, the ability to make one’s own may into the world and then pick one’s company, especially intimate partners or spouses, carefully. The idea of selectivity was very important at the Ninth Street Center in New York in the 1970s and 80s, although the Center tried to set up a sheltering community in the East Village and tended to discourage too much interaction with the outside world, hardly realistic in today’s Internet-wired world. Indeed, the GLBT community sometimes regards individual sovereignty as part of the moral justification for its progress – look at the activities of Gays and Lesbians for Individual Liberty since the 1990s.

Indeed, we have gotten used to personal autonomy, but autonomy depends upon a technological infrastructure that can break down or be attacked. Then we are thrown back into interdependence on others, which some of us have come to see as coercive. Indeed libertarian ideas of autonomy can backfire, as it can lead to existential questions about not only rejection of others but rejection of self.

We are seeing a fundamental debate emerge on what is “real life,” about balancing independence with connectivity with others, necessary perhaps for sharing the burdens of others and being one’s brothers keeper. The Gospels seem to make this a moral requirement.


See Annie Gowen: “Wedded Bliss for All or None: To Protest Ban on Gay Unions, Arlington Pastor Refuses to Conduct Marriages, Nov. 15, 2005, here.
Posted by Bill Boushka at 9:30 AM