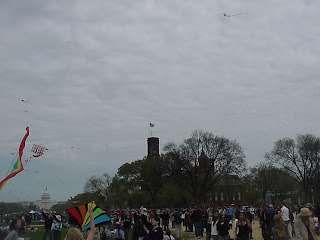 Even Hilary Clinton is on Myspace.com And she has over 32000 “friends”. Within the past year or so, however, many public school systems and private schools have been blocking access not only to Myspace but all social networking sites and other massive free-entry portals like YouTube. A typical account is “Schools block MySpace; kids fight back” by Nate Anderson at Ars Technica, link here: http://arstechnica.com/news.ars/post/20060523-6894.html Of course, the web is full of unblockers that kids get caught using by school librarians. (I don't know if they are banning blogger, too, which can certainly pose some issues with some of the personal blogs.)

There is, as always, a deeper problem. All of these sites have a lot of valuable material that would actually fit into a mainstream school program, if submitted and screened by educators. Kids will use the material at home, and hopefully for many of them, the extra material helps them put what they are taught as “approved curricula” in perspective with the real world. Some parents don’t like this, because they believe that, as one of the perks of marriage and family life, they have the “right” to mold their kids strictly according to their own religious and cultural beliefs, even in a pluralistic society. The real “dangers” come at home and parents need to learn themselves the right way to use the Net and pass this on.

But a lot of stuff on these sites is frivolous and at least distracting (I can imagine what could happen if a student googled the teacher’s name and found the teacher’s profile during class); and a small portion is very dangerous, exposing kids and their families, as well as schools, to harmful people, to say the least. That’s what you live with in a world that respects free speech. Schools say that kids surf social networking sites and personal blogs when they are supposed to be doing school work.

That certainly happens. I see that as a substitute teacher. There are plenty of unblocked sites that they surf when not watched, including hip-hop and fight clubs. What matters is what always matters, is the motivation of the individual students to do the work. You have a certain population of students that will skip when there is a sub, or goof off and sleep, or just play. You also have a population that realizes that the young people who do excel (and become visible in the media) didn’t get there by playing hookey and “taking advantage” of things where there was a sub. (Note, actor Jared Padalecki, who plays future law student Sam in Supernatural was a presidential scholar in high school, and Ashton Kutcher seriously considered medical school.) They get the fact that, whatever one’s bias in the culture wars, this is a competitive world with very serious problems for the next generation of young adults to tackle in the real workplace (global warming for starters). Getting a free public education (and AP credits) before needing college loans and having credit card debt is a good deal. And, guess what, the real world, even for superstars, has lots of 18-hour work days. I tell students that a classwork assignment is training for the real world workplace (I had thirty-plus years of it in information technology), where there are deadlines and quality expectations. It doesn’t always sink in, and pretty soon you hear hip-hop in the classroom. With a lot of adults at work, it seems like maybe it never sank in, either. A lot of people would miss their “due dates.”

Learning, of course, is hard sometimes. The only way you get comfortable with algebra (a subject which creates enormous mental blocks it seems), physics, chemistry, foreign language, or writing is to do it essentially every day until it is second nature. You can’t skip things.

As for the other-world web sites, we have always had a layering of preferred sources of information. In the 1950s (my school days), years before personal computers, making the effort to type themes was a controversy, and there was a pecking order of preferred references for term papers. Encyclopedias, however well edited, were to be shunned in favor of the original books if they could be found in public libraries (I even used the Library of Congress in high school), and legitimate periodicals (the kind indexed in Reader’s Guide) were always more up-to-date on many things than most books. Today, it is just that much more complicated.

The Pentagon announced that military personnel will no longer be able to access Myspace, Youtube, and a number of other video self-publishing sites from military computers overseas, since they tie up military networks. In some cases, soldiers will be able to access these with their own computers. I have more details on the international blog, here.
Posted by Bill Boushka at 9:57 AM