Law students finding that digital reputations can follow them 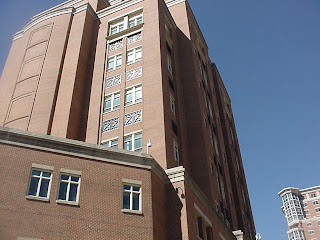 It seems that half of the postings on this particular blog have dealt with employers and the “Myspace problem”, but a story by Ellen Nakashima and Meg Smith in The Washington Post today, March 7, 2007, p. A1 is one of the most disturbing of all. The story is titled “Harsh Words Die Hard on the Web: Law Students Feel Lasting Effects of Anonymous Attacks,” at this link.

Of particular concern was the story of some female law students who could not find employment, and the students’ belief that employers may have found negative materials about them on chat boards, one in particular being AutoAdmit, which is run by Jarret Cohen. The news story identifies him as an insurance agent, so I am surprised that he can run this site without a conflict of interest with his company, unless he is totally independent, as some agents are. (When I interviewed New York Life in June 2005, I was told that new agents could have “no outside income” – not even ads from a website – and stopped the interviews immediately. I presume that the insurance company would have objected to the attention I could draw to myself even if there were no ads. See the update below.)

A cursory look shows that most of the site has reasonably valuable material, and probably only a little of it is derogatory about anyone. There does seem to have occurred one “contest” among certain students that was sexually oriented and probably not appropriate public behavior among law students. Cohen has streadfastly refused to censor material on principled grounds. There would be a legal question as to whether Cohen has any legal exposure for what the content of posters, under the Section 230 rule (which says that me may not have any), and you can read about this at EFF here. (See update below.)

Individual posters could be liable for libel if their defamatory content were actually untrue, and anonymity does not protect them from liability; their identities can be subpoenaed in some cases.

But the legal questions, as noted before, pale in comparison to the practical business and ethical questions. When a few companies created social networking sites about three years go, their youthful managements probably did not envision a world where employers would feel compelled to bottom feed on the sites for due diligence on hires.

Of particular concern is searching the web for comments about an applicant made by another party. Employers should know that much of that kind of material, especially on message boards and chat logs, is unreliable. Do they consider it a test of an applicant if they can “manage” their reputations online, or mediate what other people say about them in public? That is exactly what some new companies like Reputation Defender purport to do, as discussed in this November 30 blog entry.

An older concern (old hat by now, since widespread media reports starting around the end of 2005) is the concern from employers that applicants may deliberately disparage themselves on their own profiles and blogs in order to make what they consider valuable social arguments or protests (as against underage drinking or controlled substance laws, for example) through parody. This practice (“dreamcatching”) is coming to be seen as a no-no in the human resources world (including school systems) because of the potential legal liability it could create for employers.

The world of conventional employment, however, it itself being exposed in all of its ethical weaknesses by this whole issue of employee web exposure through search engines. I spent my career as an individual contributor in information technology, and my reputation in the outside world meant relatively little (as long as I did nothing wrong at work). Individual contributor jobs that appeal to introvert nerds have tended to go overseas, although now they may be coming back. Many people, however, make a living by selling to the outside world, or by getting paid to represent someone else’s point of view, rather than their own. This must be true of a lot of lawyers, especially trial lawyers. So many employers naturally fear that a person’s public “reputation” (or association with controversy in any area) can affect their ability to get business. So employers may even want their associates to turn over the management of their online reputation to “professionals,” (like ziggs.com) a concept that I discussed in this post.

There is one more caveat to say about all of this. If someone, as an applicant, feels so strongly about the problems in a company or a field that she is misrepresenting herself if she works there, then maybe she shouldn't. Or maybe she can and do something about the problems, but she would have to remain silent for so long. The flip side of this is censorship. I have said before that I fear that employers could inadvertently, and out of fear of unseen "paper cutting" edges, turn online presence into a test for social conformity, the way some of them look at office dress.

Tori Johnson weighted in on March 8 on ABC "Good Morning America" and noted that even when teens and college students limit their postings to private groups (a facility that blogging companies and social networking sites now promote) less scrupulous "friends" may make unfavorable postings about a person on the open Internet. A "friends" list on Myspace of 500 friends will leak anything "private." Tori suggested that every job applicant perform a "narcisurf" to their own name(s) in several major search engines. ABC presented the owner of "Reputation Defender" and Chris Cuomo and Tori suggested rebutting unfavorable (and false) comments, contacting ISPs and, in rare cases at least, litigation.

I'll add that I don't post "rumors" about people and identify them by searchable name. And I don't post the fact that I saw such-and-such a celebrity on the disco floor of a gay bar. (By the way, I think that celebrities should be able to circulate in public places without being chased; younger celebrities generally expect that.) What I post on blogs comes from verifiable sources, which I list and usually give links for, or at least specific dates and references, as in term paper footnotes and bibliographies.

Ellen Nakashima has a follow-on story (in the March 10 Washington Post, Business Section, p. D1) "Law School Deans Speak Out on Web Site Content: Yale, Penn Condemn Anonymous Attacks", at this link.
Apparently the AutoAdmit site has removed advertisements because of complaints. The site is reported as co-owned by Anthony Ciolli, a third-year law student at the University of Pennsylvania (Philadelphia). The report suggested that the student's activity could affect his bar admission process. However, the question remains whether site owners or moderators are responsible for content posted by visitors. The free speech community insists that moderators should not be, and sometimes the suggestion is made that "ignorance is bliss" -- do no editing or moderating at all, to avoid potential liability.

Again, one wonders about all of the message boards and discussion forums run by media companies, that usually cause few problems, and by various other advocacy groups, even though once in a while flaming occurs or libelous comments get made on them.

An important posting today (March 7) about trademark and copyright is on another of my blogs, here.

Ian Shapira has a story in today's The Washington Post, page B01, at this link, "Racist Writing as a Teen Haunted GMU Candidate." The story relates the fact that the now 22 year old professorial candidate, Kiwi Camara, had as a precocious student at 16, used the "n" word in discussng a 1948 Supreme Court decision that had banned racially-based restrictive covenants. Camara was dropped from consideration for a position at George Mason University in Fairfax, VA, after he apparently invited people to "google him" and the remarks were found. There is a debate as to whether a remark made as a teenager should be held against him, or whether it is so isolated as to be significant. Universities are well known to be ultra-sensitive to racist, sexist or homophobic speech, however.

A search on his name this morning does not easily show the article or language.

Picture: US Court House in Alexandria, VA, site of the Libby verdict yesterday.
Posted by Bill Boushka at 8:07 AM

A fire risk assessment helps you to identify all the fire risks and hazards in your premises. You can then decide to do something to control them.