The DADT showdown Part 2: "Bill of Rights 2" and "Bill of Responsibilities" 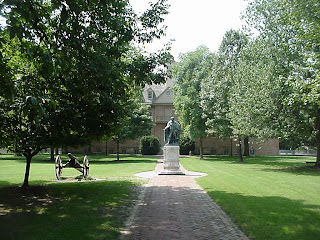 Earlier postings have built up to this next proposal, about a citizenship convention. I’ve talked about the concept of a “Bill of Rights 2”, at least as an informal document if not legally or constitutionally binding. The document would incorporate a corresponding “Bill of Responsibilities”. This was discussed on a January 8, 2007 posting here:

And I’ve talked about the way we organize all of these opposing viewpoints about social and political issues, and try to understand how other people think about them. We can even propose database technologies and techniques and business models as to how something like this should be implemented.

I get an overwhelming sense from all that is going on, that the common denominator of all of these “moral” issues is the way burdens in any free society have to be shared. That gets into the cakemix of all of our attitudes about marriage and family, and how some people want to keep the family out of fully rational discussions about equality and rights. Family helps make some of this sharing transparent. But it still needs to be understood at a certain intellectual level. Ultimately, like denominators in algebra class, issues have to become rationalized.

I can envision forums being held in several cities around the country. My choice of locations would be Williamsburg, Dallas, Minneapolis, and southern California. The agenda would be constructed over several major policy issues where individual contribution and “sacrficie” are relevant, such as (1) global warming (2) terrorism, natural catastrophe and pandemic preparedness (3) national and military service (4) the perks and responsibilities for marriage (if any) and intergenerational responsibilities (including filial responsibility).

A couple of points strike me as particularly important. One is the notion that the responsibility of the individual to family doesn’t get created merely by having (procreating) children. Expecting everyone to respond to family or filial responsibility, the childless adults, actually strengthens as social safety net. Is this to be expected? The point here is that it generally doesn’t get debated openly (outside of a few books, as where Elinor Burkett talks about “cheating the childless”). A component of this is meeting adaptive needs before claming a personal psychological surplus, and using that surplus to build constructive relationships, as documented in my experience with the Ninth Street Center (the Chapter 3 reference below).

The other major point concerns the striking and rapid development of the cyberworld as an alternate living “space” with its own topology and metrics, which allow almost anyone to become a celebrity without accountability or “normal” social connections. Fame has become a new currency replacing money, and sometimes organic relationships. Can this freeing capacity go on forever?

Generally, courts have been quite supportive of individual rights in more recent decades, including free speech and free-entry into a public space. They have tended to analyze “moral” issues in terms of individual fundamental rights and responsibilities rather than abstract notions of common good, which many people feel must apply to institutions like marriage. Some people feel that courts practice “judicial activism” and can endanger long term social stability and resiliency (to disaster) by over-focus on the individual. The extreme capitalism of our society in recent decades stresses individual sovereignty and self-reliance, and these virtues need to be brought into balance with the practical, if contingent, needs for local interdependence.

The convention procedure would follow a protocol like “the area of Mutual Agreement” which I recounted in my first book’s Chapter 3.

At this stage of this proposal, I am quite struck by own personal "moral" position. As I noted, I have gotten a lot of pressure at certain times to become more actively attentive to other people, and to develop the practical "manual" skills to carry out my share of adaptive responsibilities. Some of that needling occurs because of the inordinate attention I had to place on my own performance and then psychic comfort when I was younger. This gets to be elaborated into a demand for more emotional receptiveness to connecting to other people at their own place in life. The impression that I get these days is that it seems that the public responsiveness of "different" people like me is essential for "normal" (I grasp for a less pejorative adjective) people to find the incentive to marry, become parents, and remain personally focused on their marriages. Call this "public morality" if you will. Perhaps that is even a reasonable idea, but carrying out such expectations would not make me "straight." But it might help make things "fairer."

Here is an earlier writeup from mid 2006 on this proposal.
Posted by Bill Boushka at 11:32 AM