So, what is all of this for? Chicken Little knows. 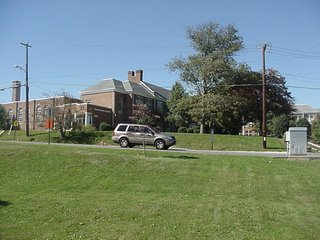 People sometimes ask me about the blogs and the websites, why are you “doing it”? What gain come out of it? What good can it do for others?

Earlier postings, like my blurb about knowledge management, should give a clue. I think it is a good thing to have a repository through which the flow of ideas can be traced, and particularly the incidents associated with a particular idea or controversy can be quickly tracked. (Example: people fired for their off-duty blogs.) My doaskdotell site does this around the organization provided by the six chapters of the first book (many authors have tried to do this with a book: look at Richard Kieninger’s The Ultimate Frontier back in the 60s)).

Now of course I would like to convert this to a more professional format. Ideally, there could be some kind of object database, managed by a company, paid for by advertisers, with free visitation. These blogs are a beginning but it would have to be taken to a great deal of technical sophistication. The legal issues associated with such “free content” were well documented in the recent documentary film about open source and the Linux operating system, “Revolution OS.” Other ways to promote this concept would be a documentary commercial film (a kind of “An Inconvenient Truth 2” perhaps) or some kind of public event discussing the “burden sharing” (or “pay your dues”) concerns raised in other postings.

Some people are particularly put off by my autobiographical presentations (especially in the first book), where I present myself as having been a stereotyped “sissy boy” homosexual, and then even (with some gall) admit that my lack of “masculine performance” itself has a moral dimension. The school systems were particularly concerned when they found this while I was substitute teaching (and I hope that they find these blogs now). It’s one thing to be born or to evolve “different” (maybe even bordering on “disability” – like the piglet in “Charlotte’s Web” who can’t help being “born small”) but why turn about-face and present this as an indicator of my own (or any similarly situated person’s) individual moral worthiness? It would seem that there is some “explaining to do”, as in a sermon. In the first place, I grew up in the Cold War, Dr. Strangelove, conscription-conscious era where we knew that we could not take freedom and our way of life for granted. My parents (“The Greatest Generation” as Tom Brokaw calls them) lived through the Great Depression and World War Ii and knew this even more. (I may have decided against a music career myself because of these fears.) So the renewed discussions about sacrifice and national service in the post 9/11, post-Katrina world with melting icecaps seems very pertinent. But what is more important, is that many of the “macho man” social norms (and not just the Village People) that oppressed me were indeed a bit disingenuous and hypocritical when applied at the individual level. I think I point this out (as in the book, when I wonder why teenage boys deliberate skate or bike on the wrong side of the street and challenge cars). Of course I am pointing these inconsistencies out. But the problems of public reputation connected to this problem have already been noted in film. In Chicken Little, Little’s "acorn stunt" inspires a website, book and movie, to the great embarrassment of his father, who warns him to keep a low profile. Little is accused of drawing attention to himself, of self-promotion, when he is really just a sissy. So he spends the course of the comic movie redeeming himself and indirectly his family.

I want to make it clear that the material on this sites is intended to present and connect issues (with incidents, to be sure), but it is not intended to target individual people. We all know that bloggers have developed a reputation for outing or exposing individual people (especially politicians) or companies, sometimes with serious legal risks that are only now starting to be explored for their potential downstream consequences. (Look at what happened in the 2006 mid-term elections!) I do not report negative information about any party unless it is first reported in an established press source (which can be quoted or linked bibliographically), or have very solid proof myself about the incident. However, the overall intent and tone of the material (the “implicit content”) may make many people feel that they are being “exposed” to the disapproval of others, even though I intend the material to be perceived as "impersonal" and actually focused on issues and principles (and on the intricate new problems that they can lead to). Indeed, before the explosion of television and then the Internet, many older ideas about speech emphasized keeping quiet about certain matters so that ordinary individuals could function within the family unit without feeling that they would be “measured” as individuals by others. Of course, this meant loss of objectivity and the tendency to fragment public speech according to political hierarchies representing special interests. I recall the papers and essay exams in my eleventh grade Va. and U.S. History class (at Washington-Lee High School in Arlington, VA, then one of the top public schools in the nation) around 1960, where the teacher insisted on answers that showed objectivity and completeness and that left out nothing. This proto-activist teacher did not tolerate the idea of political speech limited by political correctness (in a day when race and school segregation were volatile issues). The same would be true in government class a year later.

I know that there are personal credibility issues here. I seem to put myself, and maybe others around me by social connection or implication, on the hot seat when we could all have been quiet and comfortable. I seem to be drawn to ideas (and a manifesto) and not to people. I would modify that by saying, only then to people. There is a certain irony in that all of these existential questions about my own direct participation in democratic processes refer back to the debates in the 1990s about the military gay ban and "don't ask don't tell" with the ("rebuttable presumption") idea that speech in certain situations compromises group effectiveness ("unit cohesion" is the euphemism and maybe a canard) and leads to automatic questions about the penultimate purpose ("propensity") of the speech. But the idea that someone who is "different" must "shut up and sing" (keep a low profile and stay out of sight) or risk putting others on the spot and bringing everybody down (or bringing out the individual "moral hazard" of others) is one of the most disturbing notions in the whole culture war. But, then again, that's the "Chicken Little Problem." If we want a world in which tribal hierachies and families have less control over individual people, then sometimes individuals might have to pay their dues to be heard from. At least that sounds like the direction we could be heading.

Libertarian philosophy and me

My own day of infamy

Do Ask Do Tell Introduction

Tom Blankley of The Washington Times has an apt editorial related to all of this, "Losing Our Grip on Reality," Dec. 20, 2006, here.
Posted by Bill Boushka at 6:55 AM