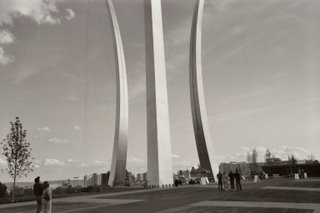 I did work as an Election Official in northern Virginia on Election Day, Tuesday, Nov 7, 2006. Because of the closeness of the outstanding race between Webb and Allen and because it can take several weeks for a definitive resolution, I won’t be specific as to where I was or discuss anything specific that might have happened during the job. I will share what it is like to do the work and give some general perspectives on the controversies around voting systems.

I had to get up around 3:30 AM Tuesday (rather like KP in Army Basic) and be there by 5 AM. We had five machines from Advanced Voting Solutions to set up, and that is simple. At 6 AM the polls opened, and the voters piled up. The turnout was presidential even though this was a midterm election. It didn’t let up much until around noon. It picked up again around 4:30 and the line backed up as people piled in the door as the polls closed at 7:00 PM. It took until about 7:40 to get everyone voted, not too shabby.

The machines use a stripped down version of Windows XP. When a voter comes to the booth, the officer inserts a mag card into a slot to activate the ballot. Everything is by finger touch. It is possible for blind people to vote by audio, and to enlarge the type. The units are light (like laptops) portable and can be carried outside to the vehicles of handicapped voters. The engineering of the units for mechanical handling is spiffy.

The units can communicate among each other by wireless, but have no connection to the public Internet. Nevertheless, cell phones may not be used in the voting room, because of remote fears of hacking and of security vulnerabilities in the Microsoft operating system.

The systems do not provide a paper audit trail of each individual vote. The voter may bring cheat sheets into the booth but not campaign literature. The voter does not carry away any physical record of the vote. I would presume that the individual votes (though not associated with individual voters) could be recovered from an internal hard drive or card of some sort. The votes include candidates for the Senate, House, county and school board officials, the Constitutional Amendment on marriage, and various bond issues and other minor amendments. A typical voter takes about two minutes.

Some voters brought their kids to watch, and this is allowed. It would give the kids an excellent heads up on an essential process in democracy from their parents before they learn about it in social studies in school.

Each machine has a variety of counters, and at the end of the day a report is printed on a 3-inch roll of tabular paper at each machine. Now, during the day, each voter is identified by an officer, and marked off on a greenbar printout, in two lists split through the alphabet. The worker enters the most recent sequential number on the greenbar listing of the name. After the polls close, the precinct must balance the count of the voters who came in the door with the counts on the machines. The total number of voters signed plus the number of provisional votes must equal the machine total count from the five machines. The possibility exists that an officer will lose concentration, and write the same number down on the sheet two successive times, resulting in an undercount on the voter sign in. In theory, this could be reconciled only by combing the lists to look for duplicate numbers. There are some classroom java and C# programs around in various textbooks (and from Microsoft with Visual Studio .NET) that could be used to make it easier to locate the duplicated numbers, as this sort of problem lends itself to textbook writers in making up simple examples of object oriented code. The balancing procedures could use major work including a design with systems analysis for automating it, with coding and implementation.

As it was, we were there until about 9:30 PM, about a 16-1/2 hour day for $130 for the temporary officials. The possibility exists that the day could be much longer for various problems (including balancing) that might occur. All election officers must sign certain paperwork and sealed results at the same time as a procedural security protection, before anyone can leave.

The media has reported many misgivings about various computer voting systems. There is a reent film from HBO Documentary Films called “Hacking Democracy” which I review here.